Potato chips and heroine have a lot more in common than one may think. Whereas expressions like sugar addict, chocolate fix and overeaters anonymous suggest a similarity between food and drugs, a recent study published in the Archives of General Psychiatry actually confirmed that the brain chemistry between food addicts and drug addicts are exactly the same when it comes to cravings and urges. 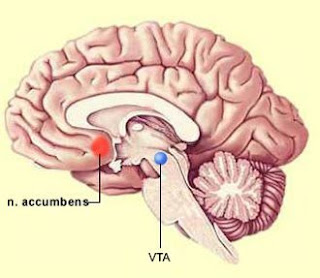 Researchers analyzed the functional magnetic resonance imaging (fMRI) brain scans of women who constantly ate uncontrollably, i.e often binged, eating past the point of hunger saturation. The brains of these women, when shown pictures of a chocolate milk shake made with Häagen-Dazs ice cream, revealed increased activity in the same regions of the brain that fire when people who are dependent on drugs or alcohol experience cravings. Not surprisingly, when women who weren’t addicted to food were presented with the same milk shake picture, they showed a much lower activity in the same regions.
Now here comes the interesting part. Five seconds after which the women were presented with the photo, they were also given the Häagen-Dazs ice cream milkshake to taste. Over the top delicious, right? Wrong. Once the women actually tasted the milk shakes, those who scored high on the food-addiction scale showed dramatically less activity in the “reward circuitry” of their brains than the other women.
This phenomenon of fantasizing about the “fix” and then being underwhelmed with the high is what leads to problematic eating and drug use behaviors. It explains the AA expression, “one is too many, a thousand isn’t enough,” and the drug expression, “chasing the first high.” The idea of the binge is better than the actual binge and hence the addict doesn’t feel satisfied with just one bite, one hit, or one drink and continues to chase the feeling by consuming more and more. Regret and ill consequences ensue.
So what is the addict to do? The key is to break the circuitry. In order to diminish the behavior, one needs to treat the fantasy and the high of anticipation. In essence, once needs to learn to stop dreaming of how wonderful the indulgence is going to be because in reality, it’s not. Quite the opposite, in fact. The more the addict practices actively quieting the voice in the head and not giving in, the softer it will become and the less strong the neural firing will be.
Many food addicts feel that they’re up against an impossible task since they can’t quit food all together as smokers, alcoholics and drug users can with their respective drugs. And it’s true – it’s much harder to become a controlled user than abstinent. This being said, most food addicts binge on certain foods and not others. I recommend becoming abstinent to these trigger foods, which are typically carbohydrates – bread, salty snacks like crackers, chips, pretzels, etc., and quick releasing sugar treats like ice cream, pop, and candy. This still leaves lots of food to enjoy. Yes, it’s too bad that these foods can’t be enjoyed, and yes it’s too bad that a recovering alcoholic can’t enjoy a glass of wine, but such is life. Acceptance and being grateful for the things you do have and can enjoy in life are key.
My recommendation: Take some time and really think about your binge foods. What’s calling your name? Write these foods down and quit - cold turkey. The hardest part is making up your mind. Once you’ve decided to quit, stop thinking and compromising and scheming and dreaming; shut your brain off as soon as it starts to fantasize: turn the channel if a tantalizing food commercial is on, avoid events and functions that might serve up your trigger foods for the first little while, don't stop at the drive through or convenience store or walk the grocery aisle with junk foods..and don’t give in. Practice. Within a few months, you’ll be well on the road to recovery; although hard days will be inevitable, in general, it will just keep getting easier and easier the longer you persist.
Posted by Melissa Hershberg, MD at 9:07 AM

Melissa Hershberg, MD
Toronto, Ontario, Canada
I'm a physician, fitness enthusiast, and nutrition lover. I'm the published author of two top selling diet books - The Hershberg Diet and The Rebel Diet and serve as medical director for U Weight Loss chains across Canada and the U.S. I have recently launched U Health Clinic which combines my passion for medicine, fitness and nutrition and I look forward to sharing ideas, videos, recipes, and information related to these areas on this blog. Hope you enjoy it!